The day our family grew

I'm not quite sure how to start the story of Paul's birth. I think it was yet another testament of trusting in the Lord's timing. Paul was 10 days late. But he needed to be so my mom could be with my sister, who was having an insanely difficult trial. I am so grateful that things worked out so my mom could be with both her and me. And my sister is such a saint that she suggested that my mom not reschedule her original flight so she could be with me for the birth. Pssh! Hands down, everyone was where they needed to be. Love you one-of-my-three-readers! :)

Anyway, at my 41 week visit, my midwife scheduled an induction for the following Saturday evening in case the baby hadn't come by then. I never imagined that I would ever reach that point of getting an induction. Luckily I didn't need it. I didn't start to get antsy until after that appointment. Come on baby!

Sunday, October 20th: Lost my mucus plug! Or part of it. Not sure. Called my mom to keep her updated since her flight wasn't until Tuesday. But not much else happened.

Monday, October 21st: I started having contractions in the morning but they weren't super bad. There was a little bit of blood so I called the hospital since WTEWYE (a.k.a What to Worry About When You're Expecting) said to and there might be a chance that maybe something possibly could be slightly out of the ordinary (doubt it). The nurse said everything's fine but that she'd call back in an hour to check in. I downloaded a contraction timer app and timed contractions for the next hour. When she called back I told her my contractions were about 8-10 minutes apart, to which she said "Congratulations! You're in early labor. We'll see you soon!" An L&D nurse at my last job and my midwife told me to labor as much as I could at home and to come to the hospital when contractions were 3-5 minutes apart. So we still had awhile to go. Contractions stopped during the middle of the day (or I just couldn't feel them, I'm not sure) and then continued on that evening, sometimes 13 minutes apart, sometimes 4, but mostly 6-9. The reality that we were going to have a baby SOON and that my mom was coming hit so I was cleaning the house and scrubbing the bathroom inbetween contractions. I refuse to believe this was due to nesting instincts. I'm far too practical for that to be the case. Obviously this baby was coming and this bathroom was not going to clean itself! When we finished (Kyle was a dear and was scrubbing the kitchen floor. THAT may have been unnecessarily nesting), we watched How I Met Your Mother and went to bed at 1 a.m.

Tuesday, October 22nd: Woke up at 3 a.m. and got out of bed when we realized we wouldn't be sleeping through contractions any longer. My main thoughts during the next few hours were, "Open up!" and "Please don't throw up!" Part of my birth plan was to be able to eat food while I was in labor. The midwife said that once I got to the hospital I couldn't have solid foods (with her Boston accent it sounded like salad foods...who said anything about salads? I want pizza!), but I can do whatever I want at home. Armed with my resolve to eat, Kyle made me some toast with applesauce on it for breakfast around 7. Oh heavens, I had such a hard time finishing that piece of toast. My midwife and everything I read said that I wouldn't want to eat when labor started. They were right! I called the hospital at 8 to let them know we were coming, called my friend Shelby so she could give a ride, and called my mom to let her know we were going to the hospital. While on the phone with my mom I had a contraction, but I was able to sort of talk and breathe through it. And I was walking through my contractions the whole morning, so Kyle and I were worried we were going to the hospital too soon. I had 3 contractions on the car ride to the hospital, but we made it. I was still talking and walking through contractions; are we at the hospital too soon? We got there at 9, I changed my clothes and waited for them to check me in, walking in circles constantly. I just needed to move and couldn't sit still! A midwife finally came 20 minutes later and had me lay down while they checked baby's heart rate and checked how dilated I was. We were praying so hard, "Please be at a 4 so they'll let us stay!" You can imagine our surprise when the midwife said, "Well, you get your natural birth. You're at an 8!" WHAT!?!?! So happy! This baby was coming soon! The nurses were surprised too because I was being so pleasant and I was still smiling.

They gave us one of the two rooms with a jetted tub and said, "Just keep doing what you're doing. You obviously know what you're doing," and left us alone. I walked all over the room in circles and loops (for some reason only counter-clockwise felt good. Weird.) and Kyle supported me during contractions. I labored in the tub for an hour or so (I wanted to have the experience and I was worried the baby would come before I got to use it.). I also got to sit on a birthing ball for a long time and the warm blankets felt marvelous. But still no baby. The midwife checked me around noon and I was at a 9 with just a little lip of cervix still in the way. Okay, so back to work. Contractions were difficult, I don't know how frequently they were coming or how long they lasted. Time sort of stopped. It seemed like they were about 10 or 15 minutes apart, but I wasn't keeping track. I was so tired from the night before that throughout all this I would sort of fall asleep between contractions. I wanted so badly to just lie down and sleep, but I didn't want to wake up and still be in labor. Baby first, then nap.

At 3 the midwife checked me again. The midwife had told me to try pushing a little during contractions to see if that would get that last lip of cervix to go away. I was still at a 9 and a bit. Ugh. I thought I would have had this baby by now! Okay, body. Time to get serious. We can do this! We are getting this baby out! I realized that when contractions came I had been tensing up instead of trying to relax and open up (contractions hurt!), so I focused on that. I needed that last bit of cervix to go away.

Around 4 the midwife checked me again. I'm at a 10! Yay! She had me go to the bathroom to empty my bladder before pushing. Then POP! Gush! My water broke! It's about time! Then pushed for about an hour and a half (definitely my least favorite part) and baby Paul was born at 5:46pm, almost 9 hours since we'd gotten to the hospital. For anyone keeping track, I was in "transition" a.k.a. the hardest but shortest part of labor for 7 hours! But again the timing was perfect because my mom got to the hospital about an hour later, and since the sun had gone down, the room was nice and dim for my new baby's eyes. The view from my room was lovely by the way. It overlooked the Charles River and Longfellow Bridge, some of my favorite parts of Boston. The sun went down while I was pushing, so in-between pushes we looked out the window and commented on how beautiful the sunset was.

Anyway, back to the baby. Paul weighed 7 lbs. 13 oz. and was 20 inches. He didn't cry much and wasn't very interested in nursing. He was really quiet and alert. He just wanted to look around, being very observant right from the beginning. Kyle held him for a long time while I got stitched up (minor tear, the stitches hurt more than labor!). I'm interested to see what kind of person he becomes. Now on to the great unknown: motherhood. I have no idea what I'm doing. Wish me luck! 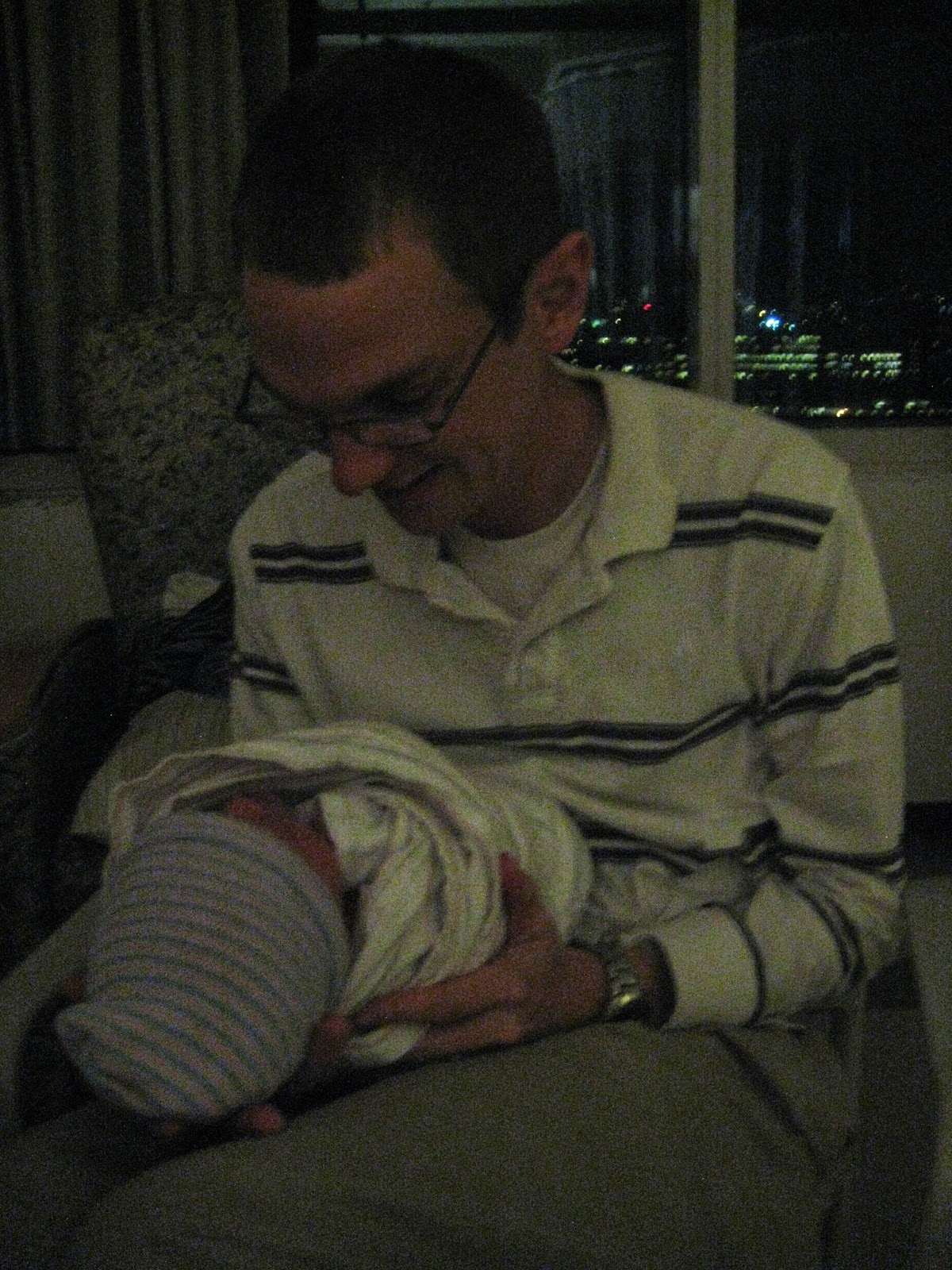 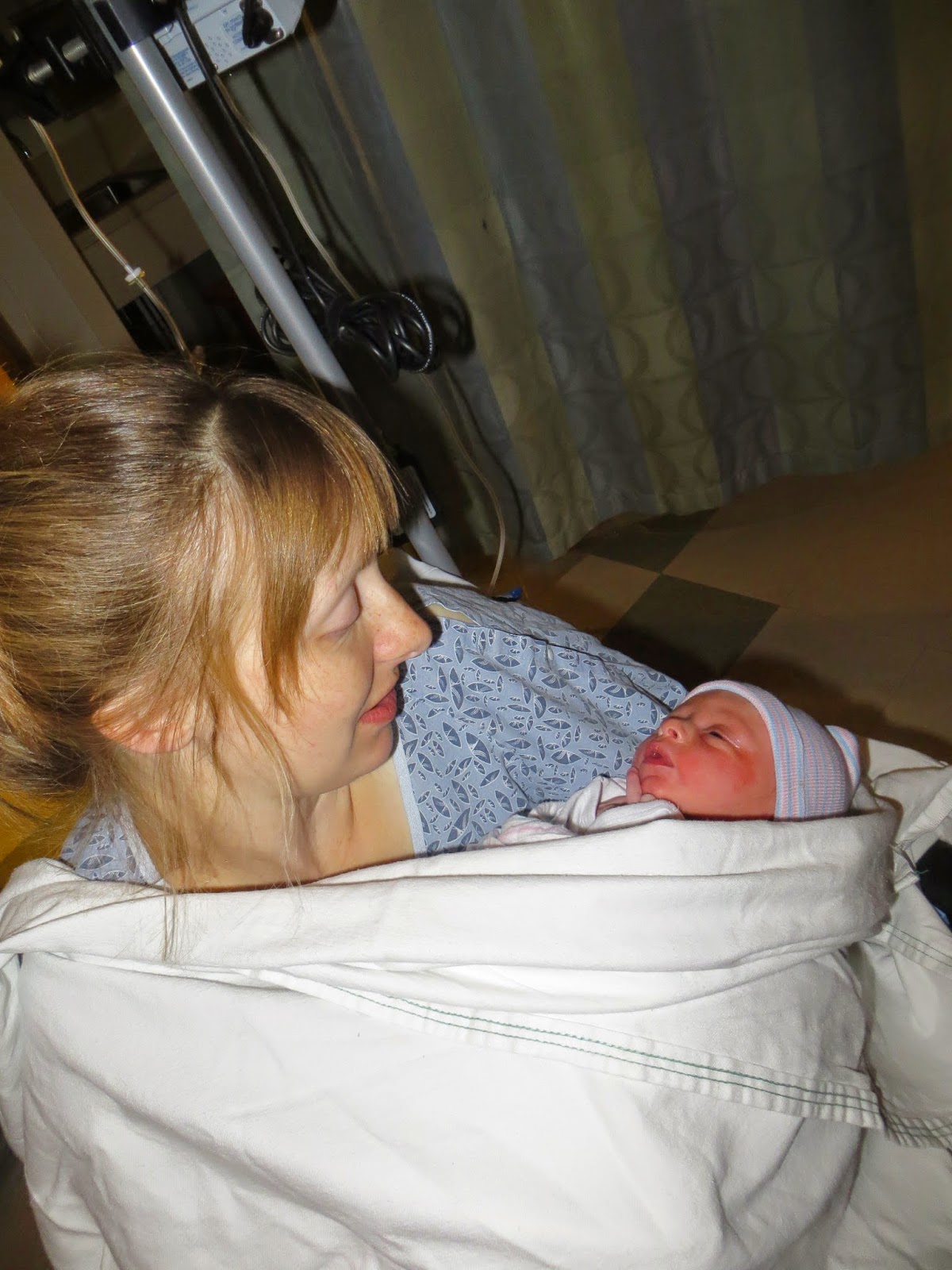 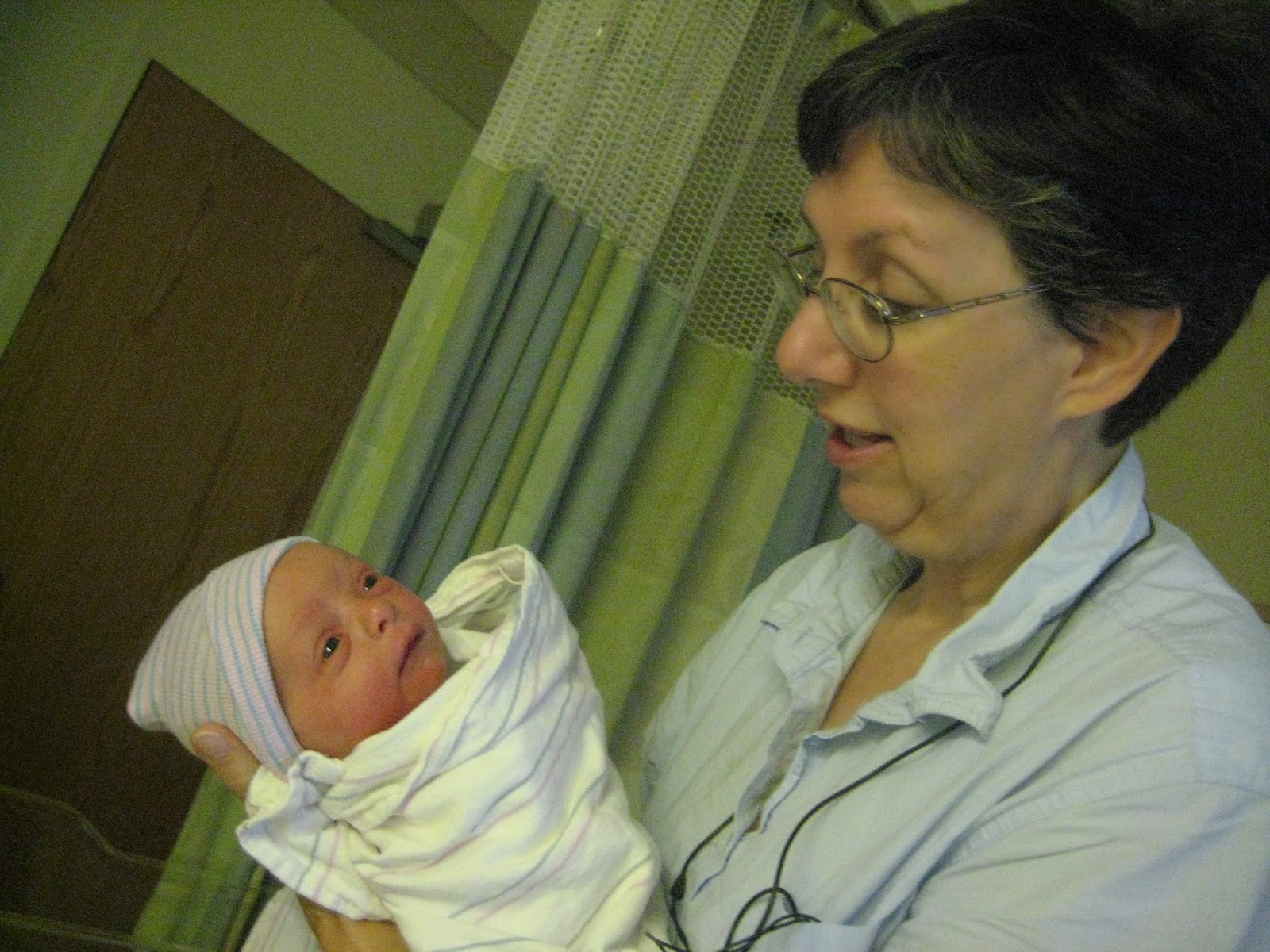 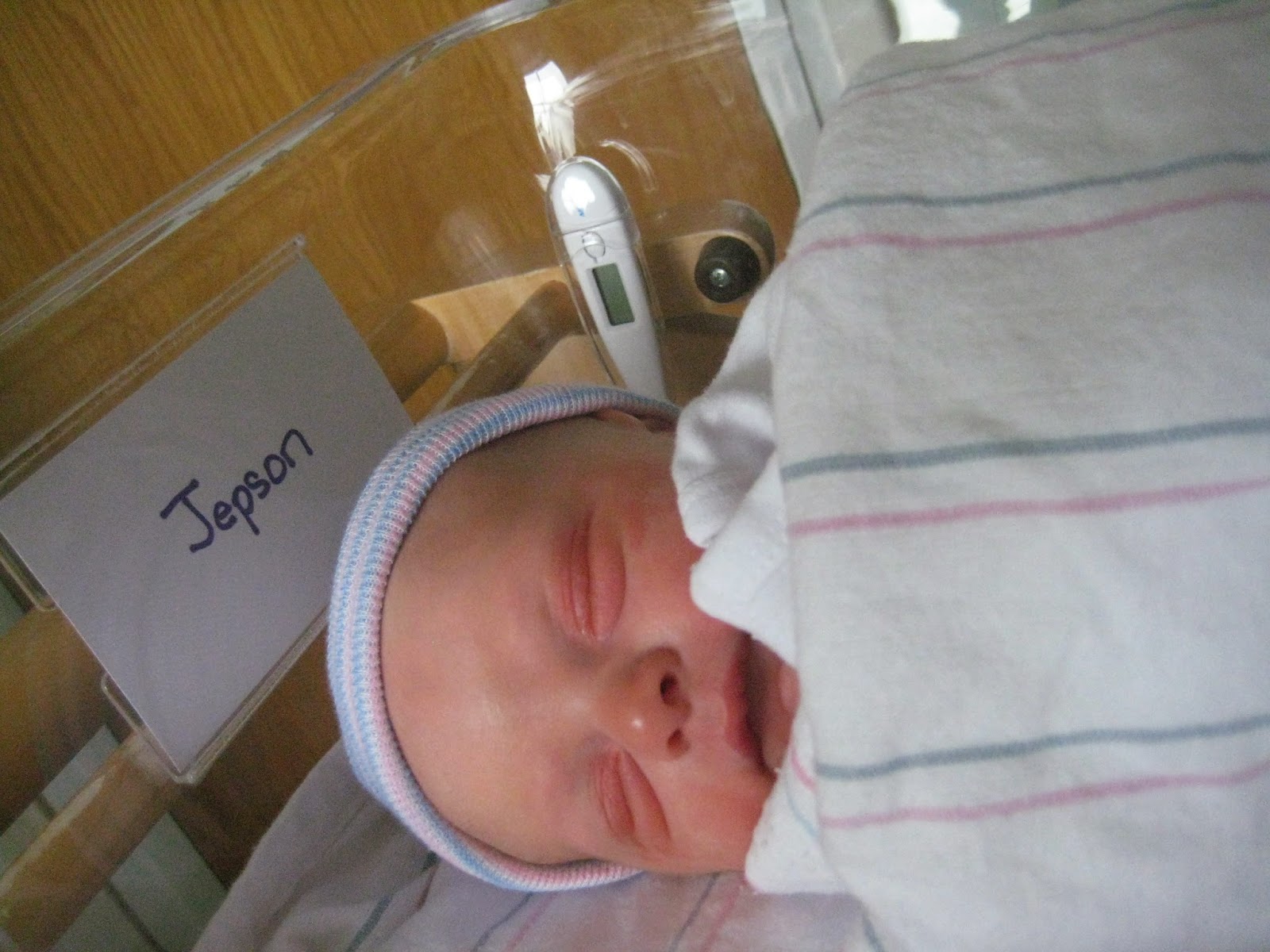 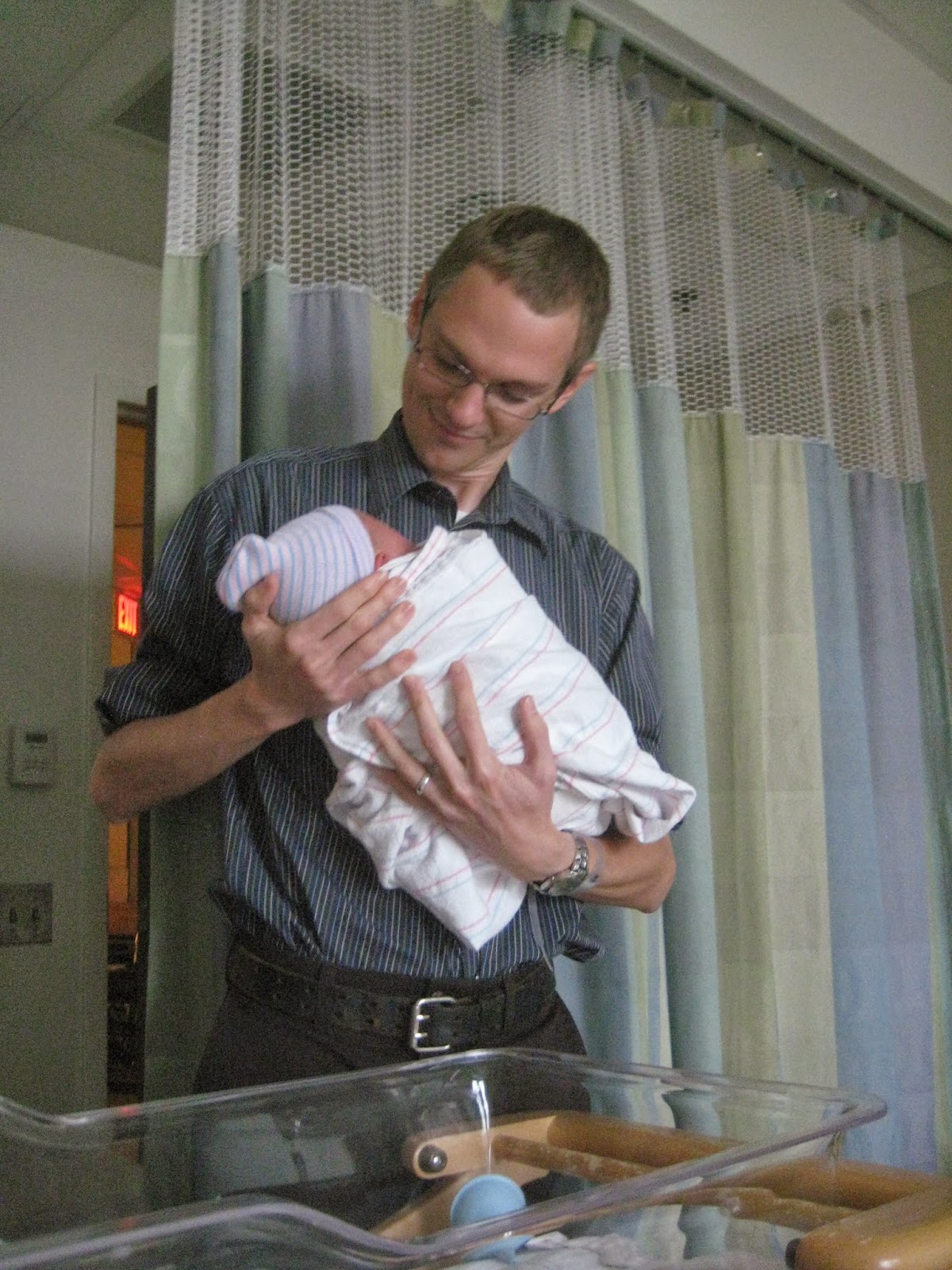 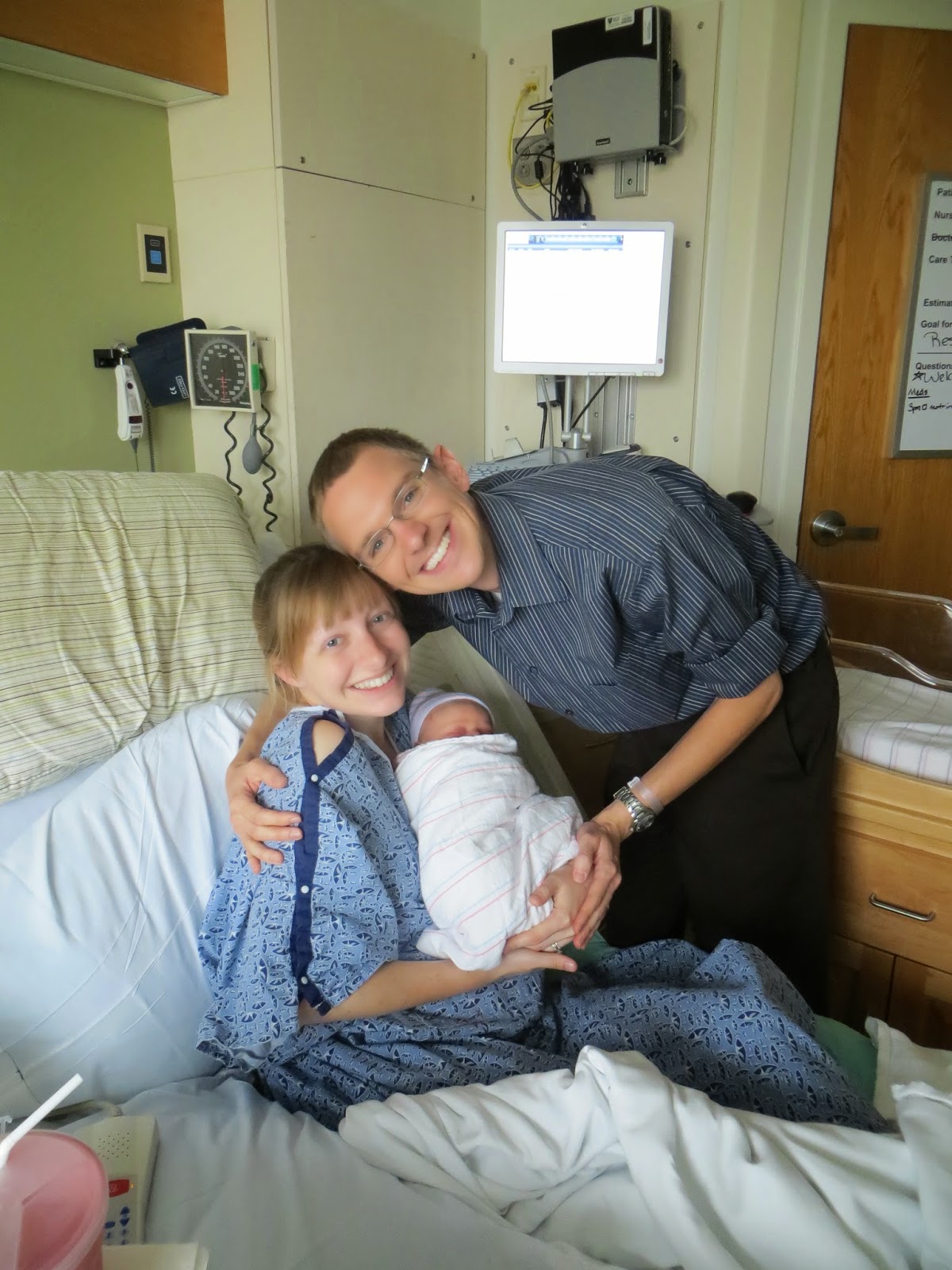 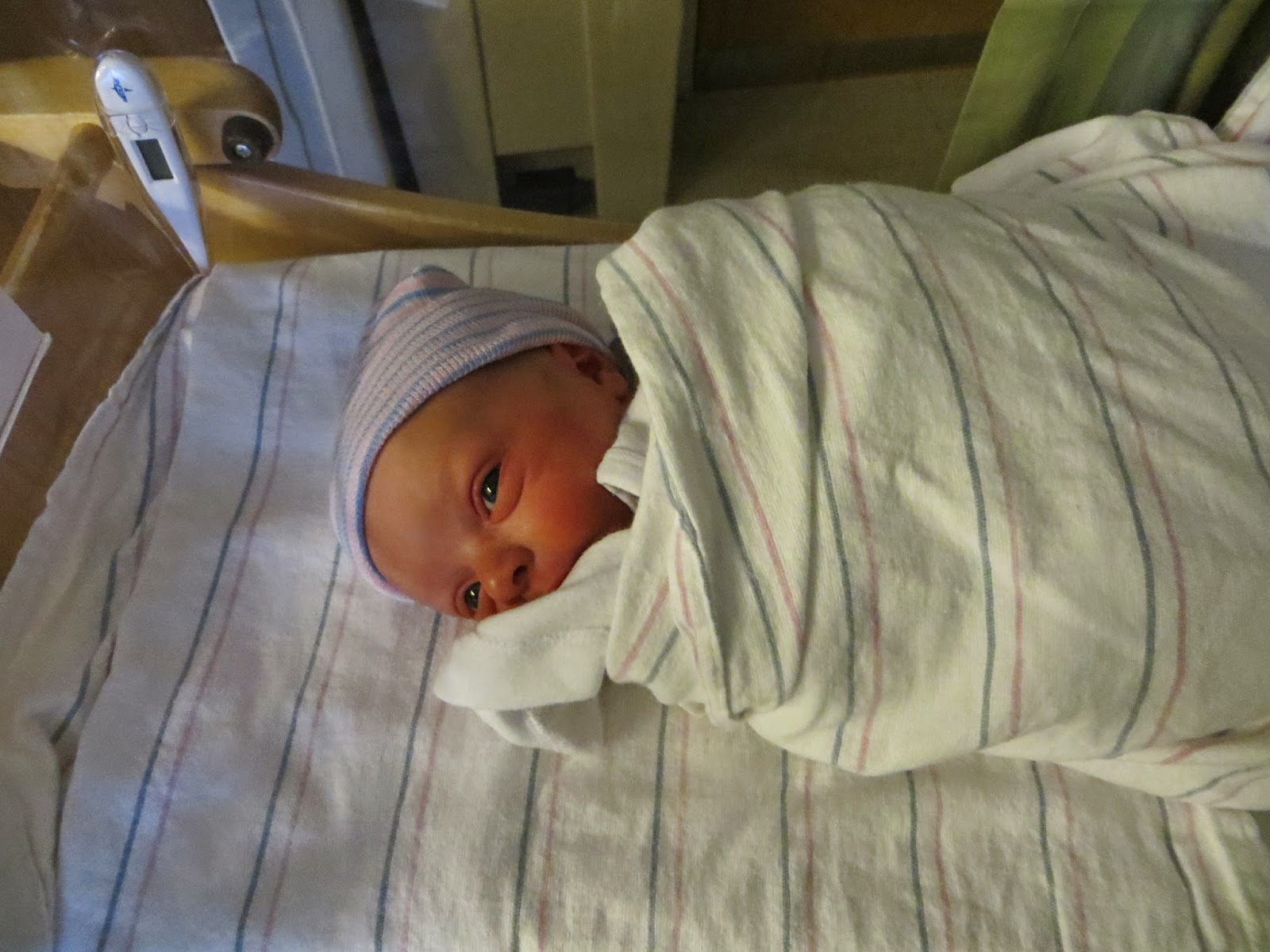 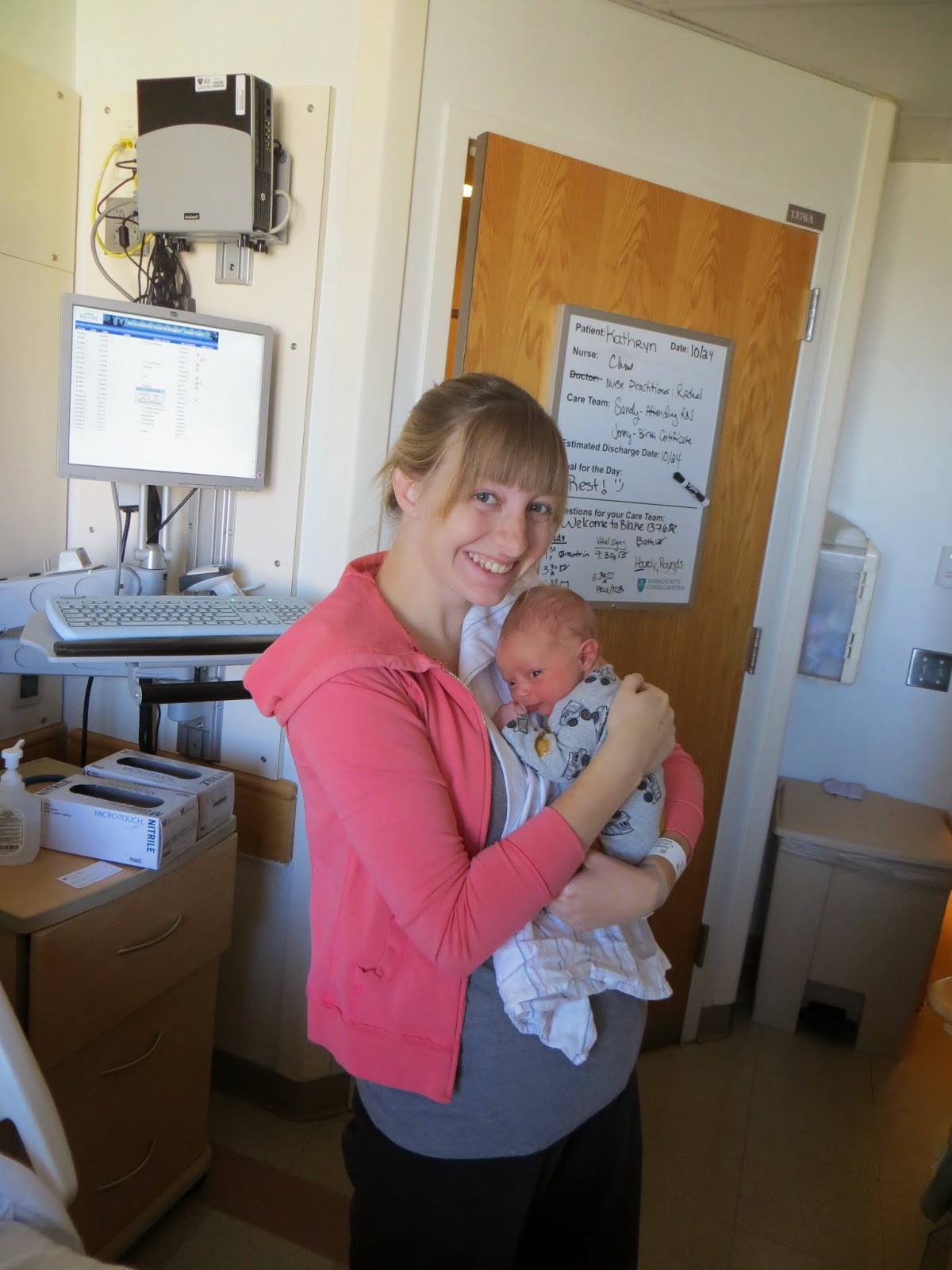 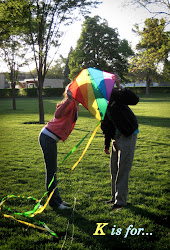